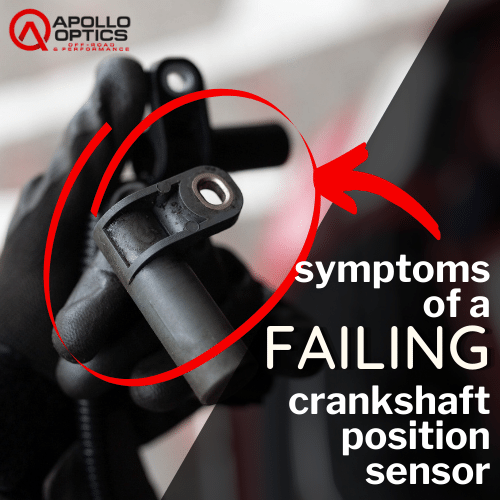 Modern internal combustion engines come outfitted with a vast array of sensors, all of which report to a corresponding control module. These modules then direct outputs in order to facilitate efficient operation that is relatively free of excess emissions.

Each sensor found on an internal combustion engine serves its own distinct purpose. Some sensors monitor temperatures, while others register flow and pressure. However, few sensors perform as vital a function as those that monitor relative engine speed, or engine timing, such as the CKP (crankshaft position sensor).

An engine’s crankshaft position sensor relays data to its corresponding engine management control module, which is used to calculate many different operational values. Nevertheless, sensors of this variety are prone to failure, at the hands of time. When this occurs, a host of symptoms may present themselves, many of which can adversely affect a vehicle’s drivability.

The following guide will assist you in understanding the role that your vehicle’s CKP plays in engine operation, as well as the symptoms that often accompany a faulty crankshaft position sensor.

How Does a Crankshaft Position Sensor Work?

These pulses are interpreted by the engine control unit as square or rectangular-wave inputs. The pace at which these waves are presented provides valuable data pertaining to the speed at which an engine is operating, as well as the point at which an engine reaches TDC (top dead center). In many engines, this role is also shared with the camshaft position sensor.

This information is vital to efficient engine operation and is used to determine ignition timing and fuel injection timing. In absence of this information, an engine’s ignition system can be adversely affected, leading to improperly timed spark at each individual spark plug. Likewise, the timing of fuel injector pulsation can also become skewed.

In any event, diagnosing a faulty sensor of this variety often involves the use of a professional-grade multimeter, or OBD II scan tool. Premium scan tools often feature modes of detection for analyzing the square waves presented by crankshaft position sensor feedback. Irregularities within these square waves often signal validity issues related to an engine crankshaft position sensor’s output.

As a crankshaft position sensor begins to fail, a number of symptoms can present themselves. However, the exact symptoms that become apparent can vary significantly from one vehicle to the next due to the differing ways in which each vehicle’s ECM utilizes specific timing-related data.

The following are several of the most common symptoms that typically accompany a failing crankshaft position sensor.

Some vehicles may store a diagnostic trouble code when timing-related data is deemed to be irrational. When this occurs, it is not uncommon for a check engine light to appear on a vehicle’s instrument cluster. At times, this can serve as the first inclination of any such issue, even before additional symptoms begin to present themselves.

However, it is worth mentioning that not all vehicles will set a check engine light when such an issue occurs. Quite the contrary, certain engine management systems do not possess the logic to determine timing-related data to be irrational. This can present a difficult set of circumstances to contend with during diagnosis.

One of the most common and perpetually aggravating of all symptoms of crankshaft position sensor failure are those which present themselves at vehicle start-up. In many cases, a vehicle’s engine will turn over yet fail to start in absence of a logical timing signal. The engine management computers found in most modern vehicles are designed to inhibit spark or fuel delivery until engine RPM has been detected.

While cranking, many vehicles begin registering engine speed at their tachometer within 1-2 seconds. If you are presented with a no-start condition, and your vehicle’s tachometer fails to budge while cranking, this can be a possible indication that the engine’s crankshaft position sensor is to blame.

Sudden stalling can be another sign of a faulty or failing crankshaft position sensor. If the delivery of logical timing-related data suddenly ceases while traveling down the road, many vehicles will suddenly stall, as if all power to the ignition system has been cut. This can be quite concerning, especially when traveling at interstate speeds.

In certain cases, a faulty crankshaft position sensor will cause an engine to misfire, stutter, hesitate, or even backfire. This comes as the result of an engine’s inability to reliably determine its own timing. When this occurs, an engine’s management software is in flux, attempting to determine proper ignition and fuel system timing values.

These symptoms can prove especially troubling when they appear to come and go without explanation. This often occurs when a crankshaft position sensor is in the process of failure, and still intermittently relays data to the engine's management software. When a signal is reestablished, such symptoms clear up until communication is eventually lost once more.

When a crankshaft position sensor has failed or is in the process of doing so, it is not uncommon for a vehicle to idle in an extremely inconsistent manner. At times, the vehicle in question can appear to idle without issue, only to sound as if it is going to stall only moments later. This often leads to a sense of dread that a failure could lead to becoming stranded alongside the road or trail.

In most circumstances, this erratic idle comes as the result of an engine’s control unit attempting to decipher less-than-accurate timing inputs. As such, the ECU continues to vary its ignition and fuel system timing values to match the irrational timing figures with which it is being presented.

A faulty crankshaft position sensor can also dig deep into your wallet when heading to the pump. In fact, it is not uncommon for a failure of this type to pose a noticeable decrease in fuel economy, often by as much as 3-4 MPG. This is not only troubling from a financial standpoint but can also prove inconvenient when attempting to travel any lengthy distance without making fueling stops that would otherwise be unnecessary.

This compromised fuel economy stems from the fact that a modern, computer-driven engine is unable to operate at peak efficiency without constant feedback regarding engine timing. An engine’s ECU comes equipped with numerous pre-programmed parameters, which are used to facilitate clean, concise combustion. When an engine’s crankshaft position sensor fails, an ECU is unable to establish a necessary input to comply with these parameters. As a result, excess fuel dosing can occur.

It is also advisable to replace a faulty crankshaft position sensor with a direct OEM replacement. Many vehicles, such as Jeeps, have been known to experience drivability-related issues upon the installation of an aftermarket crankshaft position sensor. Considering the effort that is often required to install a sensor of this type, faulty replacement components should be avoided at all costs whenever possible.

×
Ask The Automotive Experts anything on Spark-Demo. We will follow up
with you via email within 24-48 hours.
Please answer the following questionnaire
to top